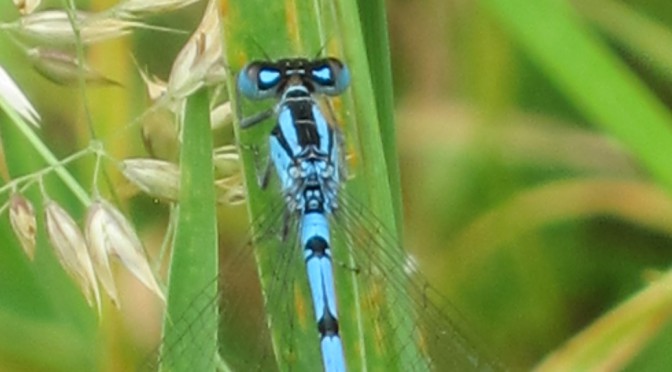 Around 25 people, adults and children,  joined entomologist Keith Porter and local botanist, Richard Jefferson for a hunt for mini beasts.

Before setting off, Keith demonstrated the use of insect nets, sweep nets and beating trays for collecting insects. We set off along the main north-south ride armed with this equipment and plenty of pots for collecting and identifying our catches.

Although butterfly numbers were down on last year’s walk, we still manged to see several species, including lots of ringlets, green-veined whites and a peacock. The silver-washed  Fritillary was again evident but no individuals  decided to settle on flowers so we were unable to see this gorgeous orange and brown butterfly close to.

We did though collect a wide range of other insects and spiders. These included  lots of soldier beetles, which has the misleading name of ‘blood sucker’, various species of hover fly, an orange ladybird which has the unusual scientific name of Halzia 16-Guttata, an oak  bush cricket, forest shield bug and a common blue damselfly.

With regard to flowers, we enjoyed the the drifts of meadowsweet along the ride and Richard pointed out the three species of thistle –  creeping, spear and marsh – all of which are attractive to insects. The frothy creamy white flowers of meadowsweet have a sweet heavy scent and it was once used to flavour mead. We also spotted teasel coming into flower. This rather stately plant was very popular with bumble bees.

We also found corn mint in damp areas. The foliage has been described as smelling of a mixture of apples and ginger bread and, apparently, sprigs of this plant were once placed in corn stacks in Ireland to discourage mice!