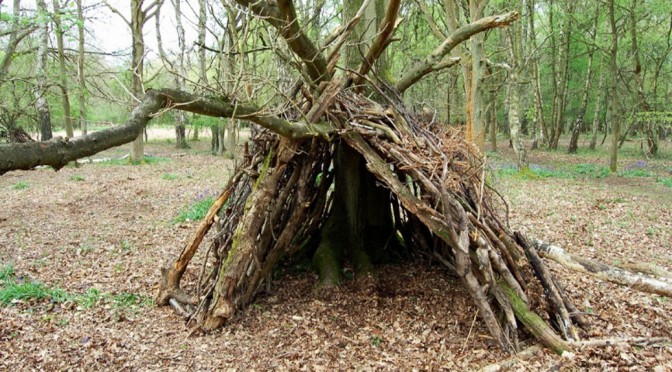 It was very pleasant day for The Friends of Bourne Wood annual Den Building Competition on Sunday.

The families used leftover materials from the thinning to create dens deep within the wood, which were then covered with bracken.  John Wilcockson, the leader of the event explained how to make the dens, suggested extras that could be added and reminded people that all of the family should fit in the den and that they should be waterproof, as a heavy shower similar to the one the day before was due to hit the wood at the time the dens were finished!

The morning session was a bit quiet with two small families battling it out, but they were equally matched and it was difficult to judge between them.  The Copeland family were crowned the winners as their den was slightly more waterproof, when the shower arrived.

In the afternoon, we had four groups, so the competition was much more difficult, with the Reid family winning.  Another family were visiting from Newark, so were able to join in the fun.

Thanks go to John for running the event and our helpers, Shirley, Brian, Eleanor and John for helping to judge and look after those taking part.