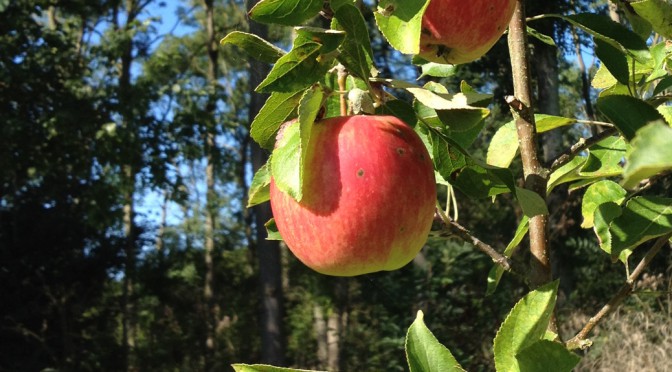 The Community Orchard Open Day, organised by the Friends of Bourne Wood, was thoroughly enjoyed by the many people who came.  There was live music from Bourne Folk Club, who play regularly at the Masons and Wishing Well, Dyke.  They played two sets of lively music – a real mix of Irish, Folk, Country and traditional tunes.  As there was plenty of sunshine people were able to sit and enjoy the music, which fitted in very well with the relaxed atmosphere of the orchard.

At lunch time all the seats were taken with people having picnics, supplemented by the delicious cakes from the cake stall and teas and coffees.

Children could try their hands at pebble painting or picture colouring, and while waiting for these to dry were able to hunt for bugs hidden around the trees!  There was also a lucky dip, and a guess my name competition.

Meanwhile, adults and children alike could investigate the craft stalls, jam stall or the plant stall.

The Friends had also picked some fruit from the orchard, both to show people the different types of apples and pears, but also so people could take some away with them for a small donation.

A huge ‘Thank You’ goes to Dean Hardy and the other musicians for their entertainment and to all our other volunteers who helped set up and look after the stalls on the day.

The Friends would be keen to hear from anyone who would like to join our committee to take on administrative and fundraising roles.  Further information can be obtained from Sarah on 07760468052.