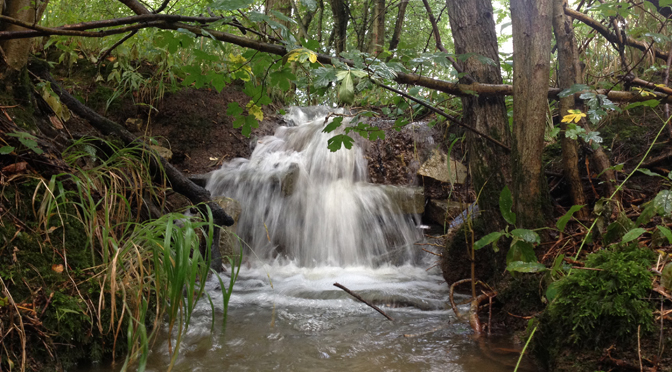 We are so lucky to have such variation in the British weather! It may not seem so fortunate when we have a run of wet and dreary days but before long they  clear and we have some sunshine again. Last month I wrote that we had enjoyed a dry spell, but this month I can say that we have endured if not enjoyed the rain! The woods reflect such changes- the undergrowth seems vibrant again and the small streams descending the gentle downhill slopes of the dykes gurgle and chuckle as they head towards bigger waterways.

The hedgerows are decorated with the bright red berries of the hawthorn bushes whilst the rose hips tend to have a deeper hue. They intermingle with the dark glistening sloe berries, ripe and ready for collection by foragers. There are still some flowers to remind us of those summer days- on my most recent stroll I found some honeysuckle blooms still in full show, exuding their fantastic scents. The autumn fungi are shooting up, encouraged by the damp. I spotted some which I thought were yellow “fairy clubs” (Clavaria corniculata) growing at ground level. They were such a vibrant colour they looked as if they had come straight out of Van Gogh’s paint box! I do not know why they are called fairy clubs- I like to think that fairies take them to their night clubs as decorations rather than them being weapons of violence! It was quite a large patch and one wonders at the marvels of nature, how they seem to just appear from nothing, the mycelium being hidden under the ground. The cobweb strands are so delicate one never knows they are there. This is in contrast to my dog whose presence I feel as she is never far away. She seems to like my company and usually walks a few steps in front of or behind me. That is until she picks up a scent of a Muntjac in which case she takes a small detour- I rarely follow her through the undergrowth on my hands and knees!