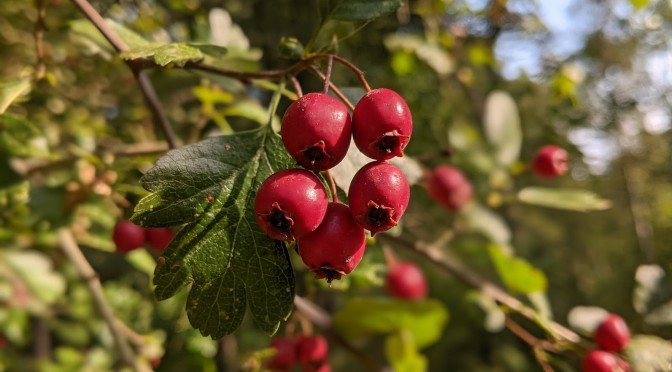 A group of around 16 joined Willie McLaughlin, Wildlife Ranger, for a walk on a gloriously sunny afternoon on Sunday.  Willie had very kindly stepped in to lead the walk as Richard had already left for Cumbria.  The aim was to look for Fruits of the Wood – but as Willie reminded us it has been a dry year so berries and nuts are not so numerous as they might be.

So, the group enjoyed the walk looking at plants and trees that could be used for a variety of things.  We started off with the glorious Beech Tree, the mast is not edible to humans but enjoyed by squirrels – however apparently the new young leaves can be used to flavour your gin!

We moved onto a more well-known fruit – the sloe – yes – sloe gin – but the flowers of the blackthorn also have medicinal purposes, as do the next couple of plants we stopped to look at – Hawthorn and Meadowsweet.

However, black bryony having wonderfully red berries is poisonous to humans but much liked by birds!  The next-door Rosehips are full of vitamin C and can be made into a syrup to ward off colds.

Trees as well as providing shade and firewood, can also be used for making instruments and furniture.  We have some wild service trees in the wood and the berries of these can be made into jellies once bletted.

Our thanks go to Willie for an informative walk – making us think about Fruits in a different way! 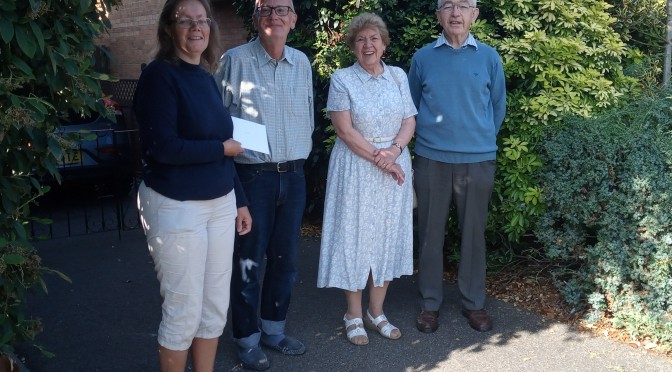 So when and where did it all begin?

I was invited by the Friends of Bourne Woods to give a talk on Flowers of woodlands & meadows at the AGM in 2008 (I think). It was not long after that that the then Chair, David Sheppard, resigned as he was moving away from Bourne and I was elected to the Chairs position.

Over the last 12 years or so that I have been the Chair,the Friends have established the community orchard (I am one of 4 trustees) and continued to offer an annual programme of guided walks and events. Some events have ‘fallen by the wayside’ such as the Santa in the woods but other new events have become established such as the annual orchard open day and the annual Wassail in January in conjunction with the Bourne Borderers.

In addition to the administrative tasks associated with a Chairs role, I have led at least one guided walk every year (apart from 2020!) usually either a spring or summer wildflower walk plus a few fruits of the forest guided walks in autumn. In tandem with Dr Keith Porter,we established the summer Bug Hunt which we have now run for around 5 years. I have also drafted a couple of notes for the website on forestry operations (felling) and on the ecology of the wild service tree (the leaf is the Friends emblem) in addition to reports on the guided walks.

Over the years, I have given a number of talks on the wildlife of Bourne Woods to various local groups such as the U3A Garden Group, the Bourne Civic Society, the Bourne Trefoil Guild and the Royal British Legion. In 2016, I wrote a booklet with the help of several others entitled Bourne Wood – A portrayal of a wood in Kesteven which was published with financial support from the Forestry Commission. Sale of the booklet helps to raise funds for the Friends activities and maintenance of the community orchard.

And my last task, apart from writing this farewell, was to draft an orchard quiz which will be used at the Orchard event on 10th October!

I am moving to south Cumbria (Burton–in–Kendal) to join my partner Jane and hope to get involved with local wildlife and natural history groups in that area. I will be coming back to Lincolnshire on a regular basis to meet up with family and friends. In the interim, Sarah Roberts will become Acting Chair until the next AGM and thereafter we hope to find a ‘permanent’ Chairperson!

I would like to thank all of the committee and other volunteers both past and present for making my tenure as Chair such an enjoyable experience. I hope the Friends will continue to thrive and carry on their excellent work for the benefit of the wood and thepeople of Bourne and surrounding areas.

I, on behalf of the Committee and the Friends would like to thank Richard for all his hard work and support during his time as Chair.  As he reminds us he has done many other things in addition to his Chair’s role and his knowledge and experience will be missed.  We wish Richard every happiness in his new life in Cumbria.