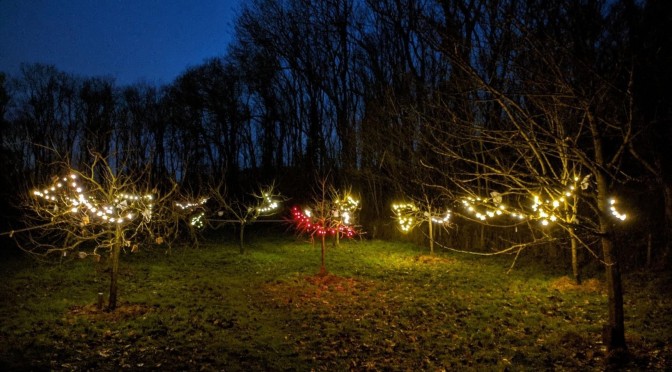 The Friends of Bourne Wood, in conjunction with Bourne Borderers Morris, held their fifth Wassail in the community orchard in Bourne on Saturday.  A Wassail is a traditional custom to celebrate the apple harvest of last year, to reawaken the trees, and to encourage them to bear fruit this year.  The weather forecast was not favourable, but by the time the event was due to start at 4pm the skies had cleared and it remained dry.  A good crowd of around 80 had gathered to join in the celebration – a delightful way to enliven a dull and damp January day.  Everyone was welcomed to the event, andoffered a taste of either mulled cider or apple juice and some homemade cake, before Bourne Borderers commenced the proceedings with a traditional Morris dance.  More dancing followed before everyone sung the ‘Apple Tree Wassail’.

The gathering then proceeded into the orchard, led by Zoe, the Wassail Queen, and the Borderers.   The trees in the orchard had been decorated with lots of fairy lights and looked lovelyin the dusk, with the path down also lit with tealights.  The trees were blessed with cider, and toast was placed in the branches for the robins, the guardians of the orchard, by anyone wishing to take part, while the musicians continued to play.   The trees were wassailed, with the customary poem, followed by lots of noise, with everyone present banging pots and pans, and cheering!

Once back on the hard-standing the Borderers danced again, and all joined in the ‘Here we come a wassailing’.  The evening ended with a traditional Mummers play – performed by the Borderers.

The Friends would like to thank everyone for supporting this event, and especially Bourne Borderers for their help and support, and all those who provided cakes and helped out on the day.  The Friends of Bourne Wood are always looking for new members, and Bourne Borderers would welcome anyone wishing to join them in their dancing – which they practice on a Wednesday at Edenham Village Hall.