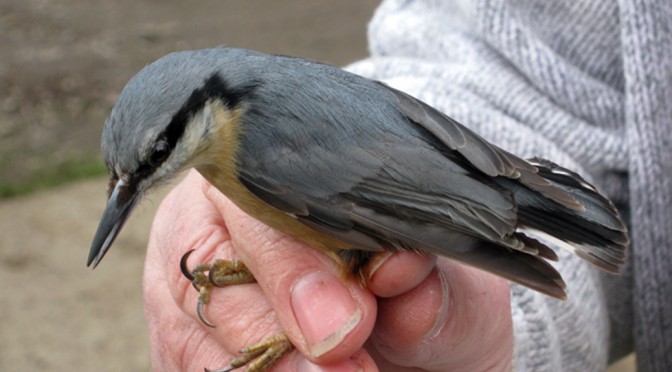 On Saturday 25 February 2012, Alan Ball from the British Trust for Ornithology (BTO) gave the Friends of Bourne Wood a demonstration of bird ringing.

The birds were caught in a fine mist net by Alan, who is licensed to undertake the ringing. Details such as weight, wing feather length, sex and approximate age are recorded before the bird is ringed and released. Species recorded on Saturday included Siskin, Chaffinch, Dunnock, Great Tit, Blue Tit, Longtail Tit, Redpoll and a Nuthatch. Good weights are being recorded and numbers are up as well particularly of Blue and Great Tits; many of which may have been hatched in the new nesting boxes put up by the Friends of Bourne Wood.

Alan regularly undertakes ringing in Bourne Wood and recently caught a Greater Spotted Woodpecker with a ring date of 8 April 2001; making it the oldest of its species recorded in Britain.
The BTO ringing scheme generates information on survival, productivity, and movements of birds, helping us to understand why bird populations are changing.

Some of the birds visiting Bourne Wood this winter have been recorded as far away as Norway in the north and from the south down in Spain.