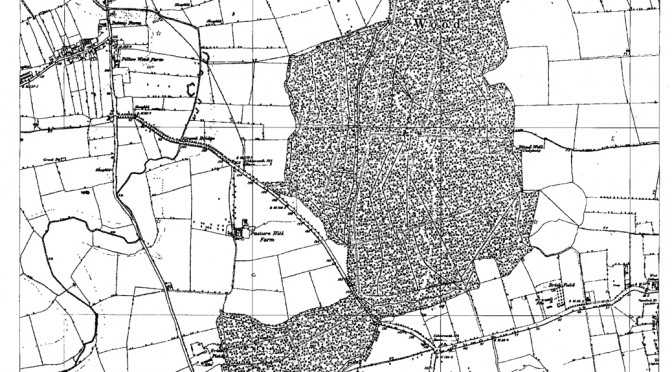 There is evidence that the current wood formed part of a larger area of woodland and forest around Bourne and in Morton and Edenham parishes referred to in the Domesday Book of c.1086. This formed part of a much larger expanse of woodland and forest stretching as far as Northamptonshire known as Brunneswald or Bromswold. Around this time, the major landowner in Bourne was Oger the Breton whose holding was likely to have included most of Bourne Wood.

Reference to woodland in Bourne appears in charters and surveys throughout the medieval period although it is difficult to attribute these to areas of the current Bourne Wood with any certainty.
Bourne Wood passed into the hands of the Marquis of Exeter possibly soon after the dissolution of the monasteries in the mid-16th Century.

Various relics of mediaeval wood banks can be still be seen in the wood with the best-preserved bank and ditch system following the parish boundary between Edenham (Pillar Wood) and Bourne Wood. This is 3 metres wide and up to 0.7 metres high with a slight ditch, to the west. The purpose of these wood banks was usually to demarcate ownership or to exclude deer.

The earliest map of Bourne Wood is the 1770 Inclosure award. Whilst this map is limited in its depiction of the wood, it does show the eastern boundary but with no internal detail (LAO Bourne Par. 17/ 1). The Morton Inclosure plan names Fox Wood, referring to it as ‘woods in Morton Lordship’, though no owner is given, unlike Nab Wood, adjacent to Fox Wood, which was owned by the Earl of Exeter (LAO Kesteven Award 54). No early maps of Edenham parish, apart from Grundy’s book map that does not depict Auster or Pillow Woods (Grundy 1753), are available.

There are references from the 18th Century to Bourne, Auster and Pillow Woods producing annual rental income for the respective landlords.

From 1815 onwards, the successive Ordnance Survey maps indicate that the outline of the wood has hardly changed to the present day.
There is little by way of information on the management of the wood prior to the 1930s. There is no doubt it would have been an important source of timber (for charcoal, building, thatching spars, tool-making) from early times and, prior to its acquisition by FC, it was thought to have been managed as coppice with standards. Various other activities would have also been carried out at various times in history such as the keeping of pigs (pannage) and the collection of foodstuffs and the hunting of game. Since acquisition by the Forestry Commission in 1926, it has been managed as a mixed coniferous and broadleaved plantation.