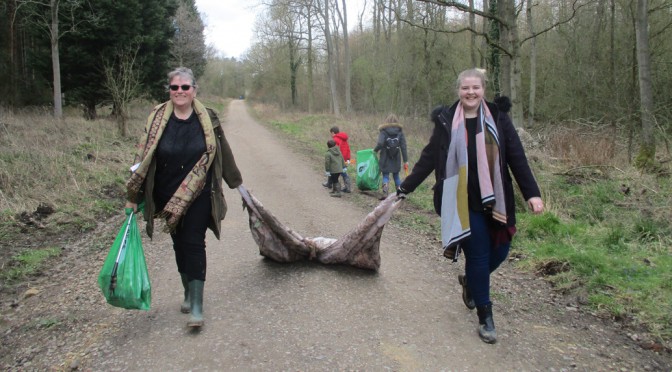 We had quite a large crowd for our litter pick – around six McDonalds employees, and 16 members of the Friends of Bourne Woods or members of the public, plus children and dogs!  The weather was much improved from earlier in the week with plenty of sunshine.  March is a really good month to do a deep clean in the wood as the undergrowth has died back leaving litter which was previously hidden, suddenly visible.

McDonalds very kindly supplied the bags, their own litter pickers, and disposed of the rubbish at the end.

After a short health and safety talk, people were furnished with litter pickers and disbursed in groups along various trails to collect whatever litter they could find.  The most unusual item this time was an eiderdown.  As always there were lots of bottles (both plastic and glass), cans, crisp packets and dog bags.  Attention was paid not just to the sides of the rides but the areas in the wood as well if accessible.

A massive thank you to all those who helped and to McDonalds for supporting the event.  This really makes a big difference to our woods, providing a cleaner and safer environment not only for the public but also to all the wildlife.