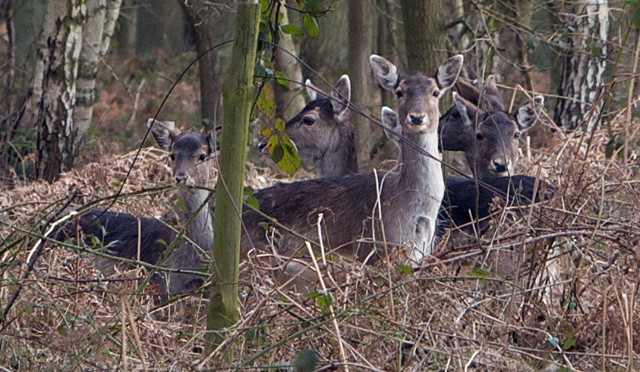 One of the highlights of any visit to the woods has to be an encounter with one or more of our largest woodland residents. Fallow Deer have been resident in the wood for about forty years since spreading from both Grimesthorpe and Irnham parks. Currently the herd numbers about sixty animals split into a number of smaller family groups throughout the wood. Although it is possible to come across deer at any time of day in the wood, that special time of day just as the sun is rising or in the evening at sunset when the deer are moving from their daytime shelters is the best time to see them at close quarters. Wait quietly by one of the ride intersections or by the edge of the wood and with a bit of patience you will be rewarded with sightings of these graceful animals.

Fallow deer have four colour types. Common as the name suggests is the most common colouring. The chestnut colour with white spots of the summer coat fades in winter to a uniform grey/brown colour.

Menil is the colour most often seen in deer parks of stately homes and is a light chestnut colour with white spots along the flanks and a pure white underbelly. These animals keep this colouration all year.

Black is not really black but is a very dark brown, slightly lighter on the lower half of the flanks but at a distance this is not obvious.

White. The most obvious at a distance for obvious reasons but not in fact an albino as some people think, it is simply a white deer. This colour becomes more intense with age, fawns are a coffee colour and as the deer gets older this gradually fades over about two years until it becomes white.

Our other resident deer is the Muntjac. These little Asiatic deer were introduced into this country at the beginning of the 19th century by the then Duke of Bedford onto his estate at Woburn and they have been successfully colonising other parts of the country ever since. These little deer, unlike Fallow, are solitary animals and prefer to keep close to dense cover however their piercing territorial bark gives away their presence in the wood. Again as with any wildlife watching patience can reward the watcher with good, if brief, sightings of this secretive little animal.