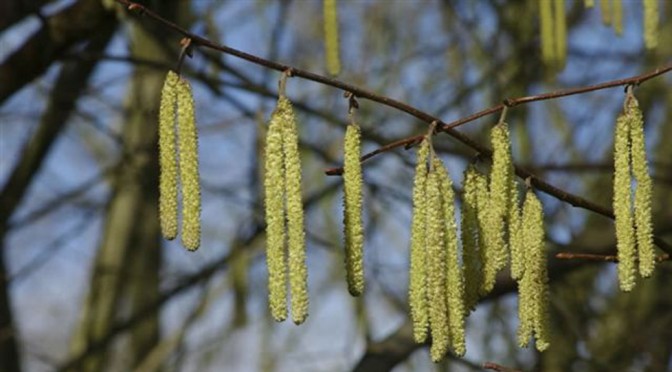 With the turning of the year we all look forward to the arrival of Spring. Already in the woods, although I write this in January, the signs are beginning to appear. An over-wintering Red Admiral butterfly has already put in an appearance and the first queen bumble-bees will soon be coming out of hibernation. On sunny early spring days they can be seen lazily quartering the ground looking for new nest sites, usually an old mouse nest though they will also take up residence in nest boxes if the old nest has been left.

It’s a bit early for any wild flowers yet but you may have noticed that Hazel is in full flower, surrounding the shrub in a wonderful golden haze. We tend to forget that trees have flowers, the catkins or “lamb’s tails” are the male flower the red female flower is much smaller in fact it is tiny.

For much of its history Bourne Wood is thought to have been a coppiced wood with Ash, Lime and Hazel being the main species. Foliage was used for cattle food and the whippy shoots for making the framework for houses and fences. From ancient times the basic product of cut hazel was wattle – split canes woven into a simple lattice work. Wattle made hurdles, fencing and the foundation on which wattle- and-daub walls were built.

Hazel-nuts were the other great harvest and were greatly valued. In days gone by hazelnuts would have provided a plentiful and easily stored source of protein, and they were often ground up and mixed with flour to be made into nourishing breads. Cultivated hazelnuts called filberts take their name from St Philibert’s Day on 20 August, the date by which hazelnuts were supposed to start ripening. Holy Cross Day on 14 September was traditionally given as a school holiday for children to go nutting, a custom which persisted in England until the First World War. Various places celebrated Nutcrack Night sometime during November, when the stored nuts were opened, though apparently some parishioners were in the habit of taking hazelnuts to church on the following Sunday to be cracked noisily during the sermon.

There are several variations on an ancient Celtic tale that nine hazel trees grew around a sacred pool, dropping nuts into the water to be eaten by salmon (a fish revered by Druids) which absorbed the wisdom of the tree. The number of bright spots on the salmon were said to indicate how many nuts they had eaten.

In an Irish variation of this legend, one salmon was the recipient of all these magical nuts. A Druid master, in his bid to become all-knowing, caught the salmon and instructed his pupil to cook the fish but not to eat any of it. However in the process, hot juice from the cooking fish spattered onto the apprentice’s thumb, which he instinctively thrust into his mouth to cool, thereby receiving the fish’s wisdom. This lad was called Fionn Mac Cumhail and went on to become one of the most heroic leaders in Irish mythology.

“. And fill all fruit with
ripeness to the core;
To swell the gourd,
and plump the hazel shells
With a sweet kernel; .”

From ‘To Autumn’ by John Keats