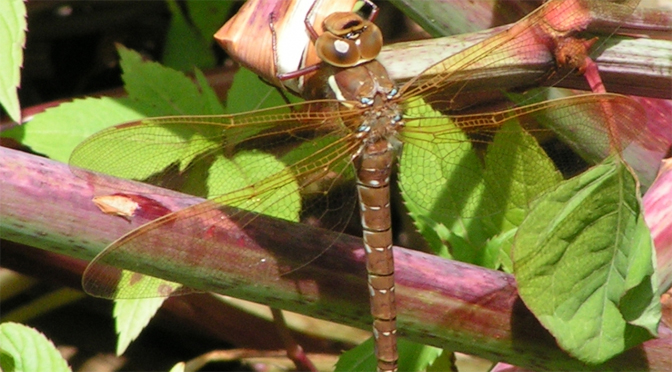 We had planned to drive to another local patch but it was such a beautiful morning we decided to do our bit for the environment and have a potter around the woods almost on our doorstep, thereby reducing our contribution to air pollutants. We were not disappointed with our decision, the sun was warm and there was no significant wind so butterflies were on the wing. Perhaps the most numerous were the ringlets- which I think is a pretty name for one of our less colourful varieties. It conjures up images of Jane Austin going to a ball in a demure yet stunning gown with her hair tied up in curls. At first sight our ringlets seem plain but, like most things, look more closely and admire the delicate white trim which edges the wing. On the underside we noted the prominent “eye spots”. The pattern of these is distinctive with a “missing” ring where number 4 should be so we have a line of three with a gap followed by another two. They are all like this- I really do not know why but it adds to life’s mysteries. We spotted several other species including commas, skippers and admirals. The orange of the commas was particularly vibrant glowing in the summer sun, yet another glory to enjoy.

We heard several families of tits moving through the canopy as the young keep in contact with the adults. There was also a family of nuthatches chatting to each other as they searched for their lunch, the fledglings seeming to have a similar though less strong call as the parents. We stopped to look at the wayside wildflowers but were distracted by the forceful presence of a large dragonfly. It appeared to be really big and powerful as it patrolled its patch and yet it virtually disappeared on landing, almost melting into the background with superb camouflage. I am not an expert but I wonder if it was a Brown Hawker as it was indeed brown! Like all dragonflies it has six legs but does not walk!

Satisfied again with sampling some of the remarkable wildlife in our local woods we set off to return home- somewhat to the disappointment of my dog who seemed to say that there were even more exciting things to find further along the path where she had spotted some of her friends!