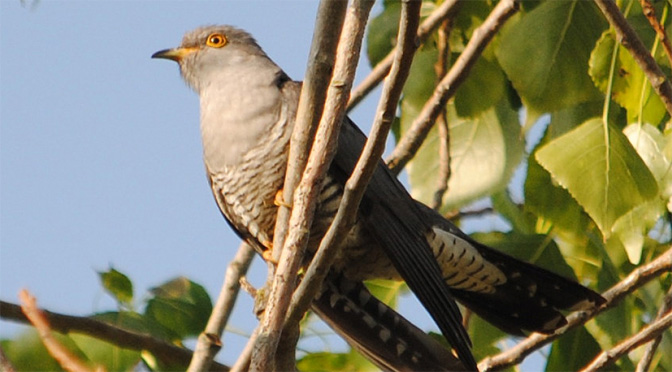 The spectacle of colour created from the swathes of bluebells has merged into a brilliant green carpet, interspersed by the bright yellows of the yellow archangel and delicate whites from the falling blossoms of the attractively named “Queen Anne’s Lace” plants.

There is still plenty of light percolating through the canopy above but the ash trees will soon be out in full leaf, joining the oaks which are already in flower. The increasing density of leaves makes it more difficult to spot the resident birds but they still announce their presence with their calls. At least 2 (possibly 3) male cuckoos are calling, trying to attract the attention of any female cuckoo nearby. In previous years I have only been sure of a single male so perhaps things are looking up for them locally after several years of decline. I was surprised when I was walking with a colleague the other day to learn that he had never heard a real cuckoo! If you too have not heard one then get down to the woods soon. The old adage says that “in May I sing night and day, in June I change my tune” (still a “cuck-oo” sound but in a different key), and “in July far, far I fly” (to Africa no less!). Let us enjoy them whilst they are still here! Other birds to listen out for include the nightingales, which have returned to the same patch of woodland again. This year there are at least 3 delivering those wonderful varied notes and sounds. These will be the males hoping to attract a female. Apparently she is not impressed by the ownership of a fast sports car but will be attracted to the bird which gives the greatest variety of tunes with the biggest gusto! Perhaps male opera singers enjoy a similar attraction from female fans? My dog seems to like the voices of her friends- she will often stop and listen if she hears the distant woof of a particular Labrador whom she admires (Milo)!