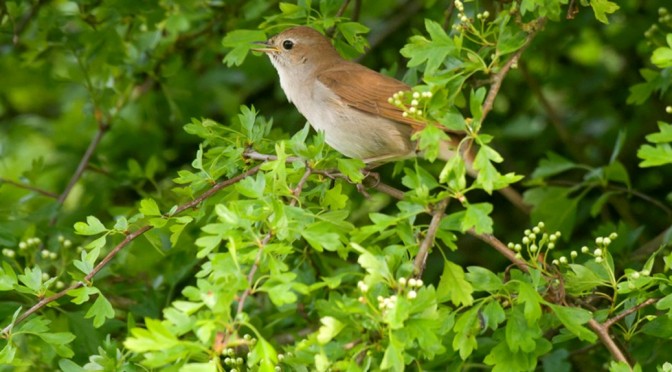 It is so exciting! They are here again! Not only have others told me but I have heard them myself! “ What on earth am I talking about I hear you say?” Well I am talking about Nightingales singing not in Berkeley Square but right here, on our doorstep, in our very own Bourne Woods!

Fifteen years ago they sang deep in the undergrowth every spring. Indeed I could then show you the patch of bushes which they would return to each year. That in itself I found amazing- to fly to West Africa for the winter and then to come home for the summer to the very same bushes! However in each subsequent year there were fewer reports and 5 years ago the sightings (more like hearings) were sporadic. I heard one singing last year and thought that might be the last. We hear that they are having a tough time with the migration- poor weather conditions and then being shot in North Africa and Malta. Things did not look good for their future, but blow me down, there has been a turn around and they are back in reasonable numbers. I hope the singing males are successful attracting a mate and then nesting. Time will tell- will there be more next year or is this a “one-off”? Why not have a wander in the woods to see if you can hear them yourself. Contrary to the name you do not need to go at night- they sometimes sing really clearly at any time of day. I often strike lucky early morning (though not too early- the dog enjoys her beauty sleep!) Whilst out in the woods with ears open, listen out for cuckoos which are also calling loudly. You do not need to be an expert at bird sounds to identify that one!

Photo courtesy of the RSPB.