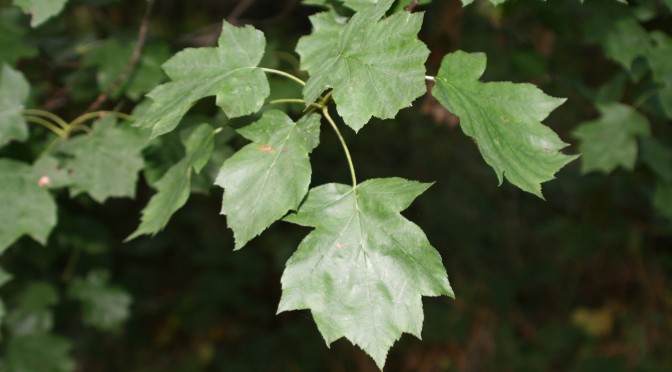 The Wild Service or Chequer Tree (Sorbus Torminalis) is a widespread but rather uncommon medium-sized deciduous tree (up to 25m) that is largely confined to ancient woodland. It has a marked preference for woods on heavy clays or soils over limestone. It is most abundant in southern and central England and reaches its northern limit in Cumbria. In Lincolnshire, it is generally rare except in its two main centres in South Kesteven (including around Bourne) and the Bardney Forest area, east of Lincoln. It is easily overlooked as it usually occurs as single individuals but these can form suckers giving rise to a group of stems. The tree has distinctive maple-like leaves with sharply pointed triangular lobes.

The creamy-white flowers appear in May and are pollinated by insects. The orange-brown egg-shaped fruits develop in September. They were formerly used as a flavouring for beer and as a herbal remedy for indigestion. The patterned fruits are thought to be the reason why it is known as the chequer tree. The fruits are edible when they have been allowed to over-ripen by storage (bletting). Birds such as Song Thrush and Redwing will feed on the fruits while Marsh Tits have been observed extracting the seeds.