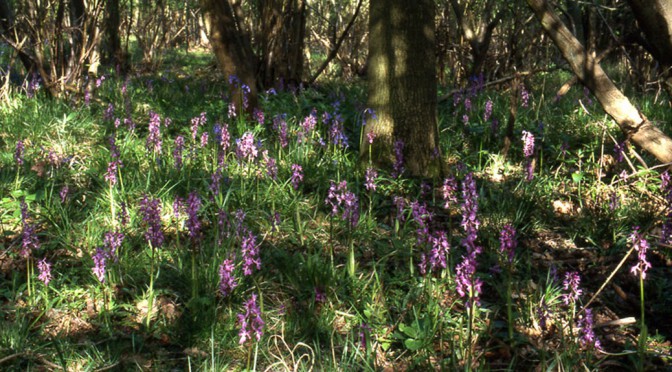 Around twenty people joined local botanist, Richard Jefferson, on a pleasant evening for a short guided walk to look at spring flowers.

Before setting off, Richard explained why Bourne Wood is so rich in wildflowers. This is due to its large size, variety of habitats (woodland, grassy rides, ponds) and soils and its long continuity as a wood – it is ancient woodland!

We encountered a wide range of plants including many of the classic woodland species such as the iconic Bluebell, Primrose, Greater Stitchwort, Bugle, Yellow Archangel, Dog’s Mercury and Wood Anemone. The creamy white flowers of Wild Strawberry were found on the grassy ride margins along with Cuckoo flower. Its name derives from the fact that its flowering coincides with the Cuckoo arriving in Britain. Cuckoo flower is also the food plant of the caterpillars of the Orange Tip butterfly, often seen in the wood.

The highlight of the evening was the opportunity to look at the colony of the showy early Purple Orchid.